Old Sarum was one of the most infamous rotten boroughs before 1832. A rotten borough was a place that had the right to send MPs to Parliament because it had been an important town in the past, but very few people still lived there. Often the land (and the rights to vote that went with this land) was bought by rich landowners who then chose their own MP.

Today, Parliament tries to keep the number of voters in each constituency roughly equal, and every so often revises the boundaries of constituencies to reflect changes in population. Yet in the early nineteenth century, this did not happen. With the growth of new towns thanks to the Industrial Revolution, the places that had MPs and the places where people lived were now very different. The new towns of Manchester and Birmingham did not elect their own MPs, but there were many rotten boroughs that did. There was lots of opportunity for rich landowners to have more influence over who was in Parliament.

Old Sarum is on a hill close to Salisbury, Wiltshire. It was the site of a Norman Castle and Salisbury Cathedral was supposed to have been built there. It was because of the Cathedral that the settlement was given the right to send two MPs to Parliament. However, in 1219 the Cathedral was moved to ‘New Sarum’ – Salisbury – closer to the River Avon. From then on Old Sarum went in to decline.

By the nineteenth century all that was left was ruins and trees. Although there were two MPs, no-one actually lived there! The people who owned the land also owned the right to vote for the MPs. In 1820 the land was bought by brothers Josiah du Pré and James Alexander, who made their money in India. They both immediately elected themselves to Parliament!  Both consistently voted against reform.

Old Sarum was often mentioned in debates over the Reform Act as ‘mounds’, ‘ditches’ or ‘ruins’. In 1831, the two brothers held their ‘election’ at 9am to avoid any trouble from protesters.

The constituency was abolished by the 1832 ‘Great’ Reform Act, and the Alexander brothers never sat in Parliament again. 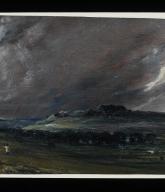 After the Old Sarum constituency was abolished, many reformers celebrated with funerals. The Times published a ‘Lament to Old Sarum’.