Pressure had been growing for reform since the 1790s as many middle and working class people could not vote, or the places they lived in were not represented in Parliament. Many working class people also faced economic hardship (see articles on Edmund Burke, Henry Hunt, Old Sarum and Lancashire). The Tory government had blocked moves for reform.

In 1830 the Tory government led by the Duke of Wellington, hero of the Napoleonic Wars, won the election. However, just a few months later it lost the support of a group of MPs opposed to any reform at all (known as the Ultra-Tories, such as Sir Richard Vyvyan). This meant that Wellington had to resign, and a new Whig government, led by Earl Grey, came in to power. From the start this government wanted to reform the system.

Earl Grey was an unlikely reformer. He was himself a wealthy landowner and many of those in his government were related to him. They all believed, however, that the system needed reform otherwise there was a risk that people would turn to violence to get their political rights. More disturbances, like that at ‘Peterloo’ in Lancashire might follow.

Grey’s government introduced a Reform Bill in 1831, written largely by Lord John Russell. It was first defeated in the House of Commons, so the government held an election to ask for more support. They won the election, and tried to pass the Bill again. This time the House of Lords rejected it. Following riots across the country, such as those in Bristol, Grey asked the king, William IV, for his support to pass the Bill. When he agreed, the House of Lords gave in, and the ‘Great’ Reform Act became law in June 1832.

Despite the name given to it by its supporters, historians now think that the reforms in the ‘Great’ Reform Act were quite moderate. It did remove many ‘rotten boroughs’ (such as Old Sarum) that had fewer than 2,000 voters but still elected 2 MPs. It gave these parliamentary seats to the growing industrial towns, such as Manchester and Birmingham. The qualification to vote was also standardised in towns across the country – if you were a man and lived in property worth £10, you could vote. This meant that some people actually lost the right to vote, but overall about one fifth of men could vote after 1832.

These changes meant that the middle classes and those in industrial towns now had a say in Parliament. There were other reforms in the 1830s, such as measures to reform local government, improve conditions in factories and, more controversially, the Poor Law which established workhouses.

However, working class people did not gain any new political rights, and many hated the Poor Law. Pressure for more reform would continue. 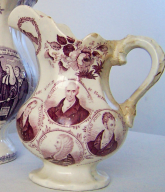