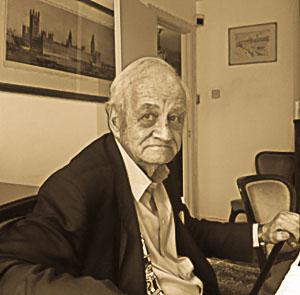 Sir Philip Goodhart was born in Cambridge, 3 November 1925. He attended school in Connecticut during the Second World War, before joining the army and returning to study at Trinity College, Cambridge, during which time he contested the seat of Consett in 1950. He married Valerie Forbes Winant, with whom he had seven children, and worked as a journalist.

Sir Philip became the Conservative candidate for Beckenham at a 1957 by-election, beating a young Margaret Thatcher. He was elected and retained the seat until his retirement in 1992. He served in his former rival’s government in various junior ministerial posts in Northern Ireland and Defence, and later became Chairman of the 1922 committee. He published several books and passed away in July 2015.

Click here to listen to the full interview with Sir Philip Goodhart in the British Library.

I’d always had an interest in the armed forces, which certainly had not been diminished by being in Northern Ireland. So I enjoyed it. Very soon it was made apparent to me that as minister for the army my principle job was to see that we always got much more money than the navy did. In that, I’d like to think, one did ,with considerable success – possibly too much success.