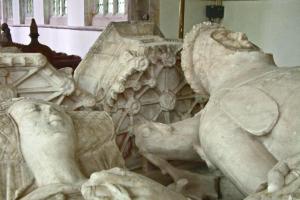 Survevor and keeper of the royal park of Brigstock, Northants. 12 Mar. 1416-d.

Although at first the execution and subsequent forfeiture for treason of Sir Henry Green appeared to bring ruin upon his hitherto distinguished and powerful family, his children, of whom Ralph, the subject of this biography, was the eldest, did not suffer the consequences of his downfall for very long. Whatever personal animosity he may have felt towards Richard II’s favourite, the newly crowned Henry IV bore no grudge against his offspring, and the decision of the 1399 Parliament to award him all Green’s possessions ‘come aillours par conquest’ was soon allowed to lapse. In response to a petition in which Ralph complained about his ‘poor estate’ and the problems faced by him in trying to support his younger brothers and sisters, the King made a grant to him in July 1400 of the issues of both his father’s own estates and those which had previously belonged to his mother, Maud. The award was confirmed in the following September, and soon afterwards a royal commission began the task of retrieving any of Sir Henry’s goods and chattels which had not already been given away, so that Ralph’s five siblings might also have some revenues of their own. In actual fact, Ralph was almost immediately put in possession of his inheritance, and a series of Northamptonshire deeds shows that as early as July 1400 he was free to dispose of his own estates at will. Besides leasing out some of his property to tenant farmers, he also began to make a series of enfeoffments, apparently designed to safeguard his title in the event of further political upheavals. His occupation of the Green estates none the less still technically constituted an illegal entry, and it was in order to gain complete protection that he sued out a royal pardon. This was duly granted to him in March 1411, and confirmed, together with his title, by the Parliament which met at Westminster in the following November. It is particularly interesting to note that Green, who had by then become an esquire of the body to Henry IV, witnessed the return made by the electors of Northamptonshire to this Parliament. One of the shire knights chosen by them was none other than Sir John St. John, who had sat with Green in the previous year, while William Huddlestone subsequently chose him to be a trustee of his manor of Sudborough. There can be little doubt, therefore, that both MPs were well disposed to further Green’s petition, although no evidence of any overt attempt to influence the election on his behalf has survived.3

According to the valuation of his estates made at the time of his death, Green enjoyed an income of at least £170 a year from land in England, in addition to whatever rents fell in from the property which his mother had left him in Monmouthshire. This figure seems to be in accordance with the tax assessments made on his Wiltshire and Cambridgeshire properties in 1412, and reveals clearly enough that Green was one of the richest landowners to represent Northamptonshire during the early 15th century. He was, moreover, one of the most influential in terms of the extent of his holdings, which were scattered over no less than ten English counties. His possessions in Wiltshire were by far the most valuable, bringing in annual revenues in the order of £65, and it is evident from his appointment as both sheriff and j.p. in this county that he spent a considerable amount of his time there. His principal residence lay, however, at Drayton, which explains why most of his other official posts were allocated to him in Northamptonshire. He returned to the family home not long after his father’s death, for in July 1401 a commission of oyer and terminer was set up to investigate a series of attacks on his property in the area. This outbreak of local hostility may well have been inspired by a lingering sense of resentment against the late Sir Henry Green, who had been extremely unpopular, although there was a considerable amount of general unrest in England at this time and such incidents were by no means uncommon. Lacking any real incentive to consolidate his estates, our Member merely contented himself with the occasional purchase of wastes and assarts from the royal forests in Northamptonshire and similar minor transactions. In June 1413, for example, the queen’s bailiff sold him a quantity of timber from the woods around Farthingstone, and a few months later he undertook to enclose and cultivate some newly cleared land there.4

Green was not slow to recognize the debt of gratitude which he, the son of a so-called traitor, owed to Henry IV; and for the rest of his life he proved a loyal and valuable servant to the house of Lancaster. During his first term as sheriff of Northamptonshire he took part in the wars against the Welsh, and in October 1405 an assignment of £40 was made to him to cover his military expenses. We are told that the campaign was still in progress when he and Sir John Dallingridge* appeared before the King’s tent to obtain a final settlement of their dispute over the right to bear arms ‘d’argent ove une croice engreilé de gules’. Dallingridge impulsively offered single combat to decide the issue ‘sauns pluis estre delaié’; but Green, who seems to have been rather more cautious, wanted Henry IV himself to make an award. Intent upon keeping the peace among his retainers, Henry decreed that both should bear the coat of arms until the case could receive a proper hearing before the constable and marshal of England.5 Green’s eminent position in county society meant that he was much in demand as a trustee, an office which he performed for several important local figures, including Sir John Trussell* and his kinsman, William, 4th Lord Zouche of Harringworth. His friendship with Zouche was well established by 1407, when the two men were arraigned together on an assize of novel disseisin at Northampton. They also appeared at about this time as plaintiffs in a suit for trespass, but this proved unsuccessful and the defendants went unpunished. Green’s appointment as a feoffee-to-uses of the Zouche estates brought him into contact with Henry Beaufort, bishop of Winchester, and the distinguished Lancastrian retainer, John Leventhorpe*, although he did not live long enough to discharge all his responsibilities in this respect.6

Understandably enough, Green was anxious to live quietly without attracting any unfavourable attention to himself, and we know comparatively little about his more personal affairs. He occasionally went to law on his own account, as, for example, in 1409, when he had two cases (one for trespass and the other for debt) pending before the royal courts, but by the standards of the age he was certainly not a litigious man. Indeed, his almost exemplary conduct in local government (marred only by the escape of a prisoner from his custody as sheriff of Northamptonshire in 1405) and his evident attachment to the Lancastrian regime successfully expunged the memory of his father’s conduct. So much so, that towards the end of his life various marks of royal favour began to come his way, including the marriage and wardship of the heir to the Tyndale estates, which was granted to him in October 1415, and the keepership of the royal park at Brigstock—a sinecure which brought with it fairly lucrative profits in the way of herbage and pannage. His own marriage to Katherine, the daughter of John, Lord Clifton, and grand daughter of Ralph, 1st Lord Cromwell, must also have added greatly to his standing in the local community, despite the fact that she herself was not an heiress of outstanding note. Although his military experience had hitherto evidently been confined to the Welsh wars of Henry IV, Green was anxious to take part in Henry V’s second invasion of Normandy, and in June 1417 he obtained permission from the King to entrust his affairs to attorneys before leaving for France. He died just over four months later, possibly while on active service. In February 1419 his executors, among whom was his widow, Katherine, indented with two masons from Chellaston in Derbyshire for the erection of an elaborate alabaster tomb in Lowick parish church, Northamptonshire, at an agreed cost of £40.7

By two major enfeoffments of May 1414 and February 1416 Green settled almost all his estates on trustees holding to his own use and that of his wife. He was careful to obtain a full release of whatever title his younger brother and next heir, John, had in the property, thus leaving his widow in possession of a very impressive jointure. She did not long remain single, taking as her second husband the East Anglian landowner, Sir Simon Felbrigg KG (d.1443), who clearly did very well for himself out of the marriage. Although they were sued by John Green in the court of Chancery for reputedly failing to carry out the terms of his deceased brother’s will, it seems likely that the above-mentioned trustees were fairly scrupulous in this regard, and that John was, in fact, resentful of the handsome settlement made at his expense. Katherine lived on until 1460, when she was succeeded by her great-nephew, John, the son of Sir John Knyvet*.8