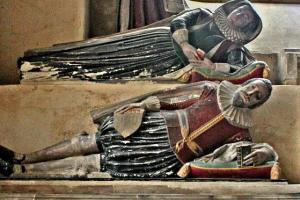 Cowper’s father was a yeoman-farmer who, in his will of December 1550, divided between his wife and four sons lands and property in Petersfield, Sheet, Mapledurham, Liss and Alton, Hampshire, and South Harting, Sussex. Returned for Petersfield in 1571, Cowper’s representation of Steyning next year was very likely owed to Richard Lewknor, though Cowper himself was well known locally. In 1571 he was on a committee for the preservation of woods (10 May), an important issue for him and one on which he and Lewknor were concerned in the next Parliament. On 28 May 1571 Cowper was appointed to the conference on the separation of the shrievalties of Surrey and Sussex. In the long 1572 Parliament he spoke once, 21 May 1572, on this question of the preservation of woods, and was appointed to over a score of committees on the following: the separation of the shrievalties of Huntingdonshire and Cambridgeshire (3 June 1572), Mary Queen of Scots (9 June), fines and recoveries (13 Feb. 1576), jurors (24 Feb.), the children of aliens (3 Mar.), collateral warranties (7 Mar.), the preservation of woods (28 Jan. 1581), cloth (4 Feb.), disorders of sheriffs (4 Feb.), the children of aliens (again) (7 Feb.), hunting (9 Feb.), the Family of Love (16 Feb.), the sowing of hemp seed in Hertfordshire (23 Feb.), a private bill (9 Mar.), Plumstead marsh (9 Mar.), secret conveyances (14 Mar.), the safety of the Queen’s person (14 Mar.), mariners and navigation (15 Mar.), sedition (17 Mar.), and iron mills (18 Mar.).

Cowper died 12 Sept. 1586, having made his will a week before. He asked to be buried in the south aisle of Harting church and, after making small bequests to Chichester cathedral and Harting and Petersfield churches, left his wife the lease of his lands in Liss, and his lease of tithes in Petersfield. There were bequests to the poor of Petersfield, Harting and Buriton, and the executor was his son and heir John.