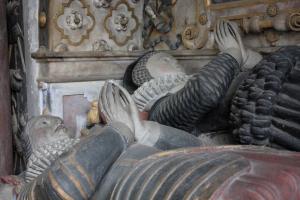 Spencer received a generous portion from his father, including the manor of Ufton and Beaudesert park in Warwickshire, the reversion, after five years, of Thruptown field in Norton by Daventry, and half his goods. It was, however, at Yarnton that he established a new branch of the family, purchasing the manor between 1579 and 1584, probably with the assistance of his wife’s fortune. In the following years he continued to buy land: Radstone in Northamptonshire in 1585, and a manor in Thornburgh, Buckinghamshire in 1591. The Queen granted him a lease of the Oxfordshire hundred of Ploughley in 1594.

It was probably Spencer’s Carey relatives who secured his return for Ripon in 1584 and 1586. His sister Elizabeth was married to Sir George Carey, whose father, Lord Hunsdon, was at this time governor of Berwick and a member of the council in the north. Spencer himself was active in the north at this time in connexion with his duties as auditor of the Exchequer, an appointment he retained until the end of his life, though it is likely that he spent a considerable part of his time in Oxfordshire, where he took his share in local administration. Two of his servants were involved in the abortive rising of Oxfordshire peasants in 1596, and he was hated for enclosing common land. Spencer died 18 Dec. 1609, having made his will on 28 July in that year. It was proved by his.eldest son and heir, Thomas, on 3 Feb. 1610. Spencer was buried in Yarnton church. Nothing has been ascertained about Spencer’s religious views. The family was Catholic in the seventeenth century.