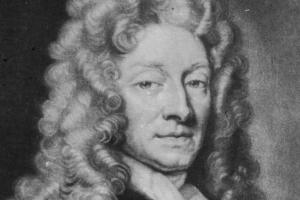 The parliamentary activities of Wren, England’s most famous architect, occupy a secondary place in his long and brilliant career. He was the first cousin of Matthew Wren and Sir William Wren. His father was deprived as a Royalist during the Civil War, and died before the Restoration.3

Wren’s early years were spent in academic pursuits as a mathematician and scientist, and his first attempts to enter Parliament were for university seats, where his family record of loyalty to Church and King would be particularly acceptable. However he was defeated at Cambridge in 1667 by Sir Charles Wheler and at Oxford by Thomas Thynne I seven years later. Meanwhile the reconstruction of London after the Great Fire had given him his great opportunity and determined his career, and in 1669 he became surveyor-general of the royal works, a post he was to hold for half a century. In 1685 he was named freeman of Plympton under the new charter and returned for the borough to James II’s Parliament. An active Member, he was appointed to 15 committees, including that to recommend expunctions from the Journals. On 4 June he was named to the committee on the bill for the new parish of St. James Piccadilly, where he produced his own favourite among his many churches. The House resolved that part of the revenue arising from the licensing of hackney coaches should be applied to Chelsea Hospital, which he had built three years before, and he was among those appointed to bring in a bill. On 22 June he was named to the committee for his masterpiece, the rebuilding of St. Paul’s. His last committee was on the bill for the relief of London widows and orphans.4

Wren was nominated for re-election as court candidate in 1688. But at the general election of 1689 two Whigs were returned for Plympton, and he transferred to Windsor. His uncle and father had both been deans of St. George’s chapel, and his position as comptroller of the works gave him a strong interest in the borough. He took his seat in the Convention, and according to the Ailesbury list voted to agree with the Lords that the throne was not vacant. But he had been named to no committees when his election was declared void. His two later periods of parliamentary service were also brief. His son, however, sat for Windsor in Queen Anne’s last Parliament. Wren himself remained a Tory, and was dismissed from office under the Hanoverians. He lived to see his great cathedral completed, and was buried there on his death on 25 Feb. 1723. His official salary had been meagre, but he was able to leave £10,000 in trust.5