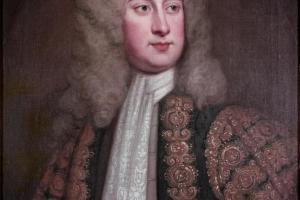 At the accession of George I, the French ambassador described Hanmer as the

He was offered the post of chancellor of the Exchequer, which he refused. On the breach between the King and the Prince of Wales in 1717 the French ambassador reported:

He was absent from the debate on Lord Cadogan, observing that he was unwilling to lend his shoulders ‘to the setting up again of a certain man [Walpole] on horseback’.1 A year later, Atterbury wrote to the Pretender:

The most despicable party in England are the Hanoverian Tories, a handful of men without dependants or credit, and whom both sides equally agree in exposing. There has been a meeting of them lately in Yorkshire at the Archbishop’s. Hill [Rt. Hon. Richard, see Hill, Sir Rowland] and Sir Thomas Hanmer were there and have laid some new scheme for the winter campaign, and one branch of it is adhering irremovably to the court at Richmond [i.e. to the Prince].2

Nothing, however, came of this. For the rest of his career he was a distinguished but ineffective figure in opposition, whose speeches, Hervey writes,

were always fine pieces of oratory, but never of any signification ... With all his sense, what he brought himself to at last, by a wavering odd conduct, was to be neither of use to one party nor a terror to the other, and to be disliked at court without being beloved in the country.3

A similar account of him is given by the elder Horace Walpole:

His person, parts, and principles were all of a piece; he had a very handsome mien and appearance, but tis said he could not please the ladies; he could make an eloquent, elaborate, and plausible speech, but never was thought a man of business, or knowledge. He would act and vote with the Tories and yet said he was no Jacobite; he declared himself for the Hanoverian succession, and would never act or vote in support of it; he died at last, poor gentleman, without having much obliged or disobliged any person or party, and rather pitied than either hated or beloved.4

The younger Horace Walpole describes him as

a dainty Speaker, who was first married to the Dowager Duchess of Grafton, and afterwards espousing a young lady, the first night he made some faint efforts towards consummation, and then begged her pardon for her disappointment. See Mr. Thomas Hervey’s letter to him on this subject. He lived long, published an edition of Shakespeare, and always wore white gloves. In Othello he made the emendation ‘a fellow almost damned in a fair phiz’ instead of ‘fair wife’, because he found no other mention of Cassio’s being married.5