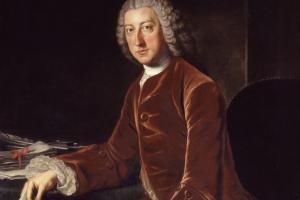 A younger brother with only £200 a year, William Pitt at the age of 22 acquired a cornet’s commission costing £1,000, the money, according to the 2nd Lord Egmont, being provided by Walpole,1 presumably in return for the support of William’s elder brother, Thomas, who brought four Members, including himself, into the 1727 Parliament. But in the next Parliament, to which Thomas returned his brother, both Pitts went into opposition, William making a distinguished maiden speech against the Government on a place bill, 22 Apr. 1735.2 By the following session he was known as ‘a very pretty speaker, one the Prince is particular to, and under the tuition of Lord Cobham’,3 with whose nephews, George Lyttelton and the Grenvilles, he formed a political group, nick-named ‘Cobham’s cubs’.

On 29 Apr. 1736, when the House of Commons addressed the King on the Prince of Wales’s marriage,

three very remarkable speeches were made by Mr. Grenville and Mr. Lyttelton, two of Lord Cobham’s nephews, and Cornet Pitt, who got up one after another in the House of Commons to compliment the Prince’s character and the Princess’s family and to insinuate, not in very covert terms, that the King had very little merit to the nation in making this match, since it had been owing to the Prince demanding it of his father, and the voice of the people calling for it too strongly not to be complied with.4

Dismissed by the King from the army for this speech at the end of the session, Pitt was compensated next year by a place in the Prince’s household. In Parliament he continued to act with Lyttelton and Grenville against the Government, notably in the debate of 9 Mar. 1739 on the Spanish convention, when they are described as ‘young gentlemen who took great personal liberties’.5

After Walpole’s fall the Cobham group parted company with the Prince, who supported the new Administration, while they remained in opposition. When Parliament re-assembled on 16 Nov. 1742, Pitt made a speech of which the Prince said that ‘Pitt might as well have spit in his face as he spoke as he did’.6 The King might have said the same of Pitt’s speech on 10 Dec. against the grant for the Hanoverian troops in British pay. ‘It is scarcely possible’, Lord Rosebery writes, ‘to conceive sarcasms more calculated to afflict the sovereign in his tenderest susceptibilities than those which Pitt now launched, even as we read them in an imperfect report; they are, indeed, so masterly in this way as almost to prove their authenticity’.7 When Pelham became head of the Treasury in August 1743, Walpole, now Earl of Orford, urged him to strengthen himself by coming to terms with Pitt. ‘Pitt’, he wrote, 25 Aug., ‘is thought able and formidable, try him and show him’. And again, 18 Sept., ‘Pitt may be put into the Treasury, a monstrous advancement that. He will be useful there, or it takes out his sting’.8

In the next session, Pitt, now a member of the opposition shadow-cabinet, attacked Carteret as ‘an execrable, a sole minister’, ‘the Hanoverian troop-minister, a flagitious task-master’, whose ‘sixteen thousand Hanoverians were all the party he had’. Nor did he spare George II, deriding the dangers which the Address congratulated him on escaping from at Dettingen; describing him as ‘hemmed in by German officers and one English minister without an English heart’; and calling on Parliament to ‘snatch him from the gulf where an infamous minister has placed him’. In the debate of 18 Jan. 1744, again on the Hanoverian troops, he appealed to the Pelhams, as ‘the amiable part of the Administration, to give up so odious a point, which (if carried), would do them no service in the nation, and only tend to advance another’s [Carteret’s] power in the Closet’.9

Pitt’s speech paved the way to a junction with the Pelhams, which was effected in November 1744, when Carteret, now Granville, was forced to resign, most of his supporters in the Government being turned out to make room for the heads of the Opposition. The results of the junction were manifested on 23 Jan. 1745, when Pitt’s ‘fulminating eloquence silenced all opposition’ to the vote for the employment of 28,000 British troops in Flanders. The post earmarked for him at his own request was that of secretary at war, but owing to the King’s personal objection to him he remained out of office till the Pelhams made his appointment ‘into some honourable employment’ one of the conditions of their own return to office in Feb. 1746. Even then George II objected so strongly to Pitt’s appointment to the War Office, declaring that ‘that fellow should never come into his Closet’, that it was necessary to substitute some post not involving personal relations with the Sovereign.10 He was accordingly appointed to a lucrative sinecure, which he soon exchanged for the Pay Office, where he followed Pelham’s example of refusing to take the perquisites.11

Thus at the age of 37, after 11 years in Parliament, Pitt, in his own words, entered ‘the stream of promotion, which by its natural current and the right of succession in the graduation of office ... commonly bears men to fortune’. Entering the stream at a place reached by both Walpole and Pelham before him at a comparable age and in much the same time, he could reasonably expect to arrive in due course at the same destination, that of first minister. In this expectation he put up with eight years ‘at the oar of parliamentary drudgery’12 under Pelham. Only Murray, the future Lord Mansfield, could compare with him in mastery of the House of Commons: ‘they alone’, Chesterfield told his son in 1751, ‘can quiet and inflame the House; they are so attended to in that numerous and noisy assembly, that you might hear a pin drop when either is speaking’.13 But when Pelham’s death in 1754 opened the way to Pitt’s promotion, George II, in referring the choice of a successor to the Cabinet, said significantly that ‘he hoped they would not think of recommending to him any person who had flown in his face’. The royal veto was allowed to prevail, leaving Pitt, as he himself put it, stuck ‘fast aground’ in ‘the stream of cabinet promotion ..., exposed to the ridiculous mortification of seeing everybody pass by me that navigates the same river.’14 He died 11 May 1778.