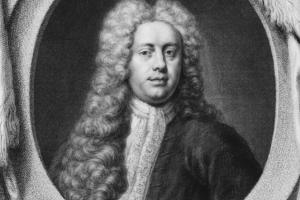 Wyndham’s career from first to last was dominated by Bolingbroke.

He was [Hervey writes] a man of family, fortune, and figure, but pushed up to the employment of chancellor of the Exchequer, by the favour of Lord Bolingbroke, at a time when neither his years, his experience, his talents, his knowledge, nor his weight could give him any pretence to distinction.1

When at the beginning of the reign of George I Bolingbroke fled to take service under the Pretender, Wyndham became one of the heads of the rebellion in England planned for the summer of 1715, sending a message to the Pretender in July ‘not to lose a day in going over’.2 On the outbreak of the rebellion he escaped from a messenger sent to arrest him at Orchard Wyndham, but after a reward of £1,000 had been placed on his head he voluntarily surrendered himself, relying on the protection of his father-in-law, the Duke of Somerset, a member of the Government. Excusing his conduct, Bolingbroke wrote to the Pretender:

I know the virtue of the man so well that I have not the least distrust of him, but I confess to you, Sir, my apprehension is, that after his escape, he tried the West, and found them not disposed to rise; in which case he had perhaps nothing left to do, but his father-in-law’s credit to save himself as he could.3

In fact, the west country Jacobites had gathered at Bath as arranged, only to receive a message from Wyndham ‘that he had surrendered his person to the Government and begged they would consider their own safety’, whereupon ‘after many imprecations, urged by their resentment for what they called his treachery, they dispersed several ways to their particular friends’.4

After a few months in the Tower Wyndham was released on bail, to find that Bolingbroke had been dismissed by the Pretender and that a fresh Jacobite rising with Swedish help was being planned (see Caesar, Charles). In August 1716 he joined in an appeal to the Pretender to land in England immediately with 5,000 regular forces and 20,000 stand of arms, adding a plea for Bolingbroke’s reinstatement, as he was merely charged with negligence, not treason.5 But in September he received a letter from Bolingbroke, now engaged in working his passage with the British Government, urging him at all costs to keep out of an enterprise foredoomed to failure.6 About the same time the Pretender wrote to him justifying Bolingbroke’s dismissal but earnestly desiring the continuance of Wyndham’s valued friendship. Though Wyndham’s reply was considered in Jacobite circles as satisfactory,7 he seems in practice to have followed Bolingbroke’s advice.

In 1720 Wyndham resumed his connexion with Bolingbroke in Paris, whence he sent his last letter to the Pretender, protesting his continued devotion to the cause. His name was also sent to the Pretender in 1721 as a probable supporter in the event of a rising.8 Three years later Bolingbroke proposed to Walpole that he should ally himself with the Tories against Carteret and the followers of Lord Sunderland, stating that Wyndham and his close friends, Lords Bathurst and Gower, were now ‘ready to enter into any measures’ with Walpole and Townshend, being ‘desirous to rid themselves of the disagreeable situation they were in by renouncing Jacobitism’.9 The overture was rejected, but thenceforth Wyndham took every opportunity ‘to declare himself a strong Hanoverian’, which ‘made the Jacobites not love him, though they did not care to separate from him’. He further antagonized them by supporting the bill restoring Bolingbroke’s estates.

Walpole’s rejection of Bolingbroke’s overture, followed by his breach with Pulteney, led at the end of 1726 to the formation, under Bolingbroke’s auspices, of a combined Whig-Tory opposition, in which Wyndham, now the recognized ‘head of those calling themselves Hanover Tories’,10 acted as the mouthpiece of Bolingbroke, himself excluded from Parliament. In Speaker Onslow’s words:

by frequent speaking in public, and great application to business, and the constant instruction he still received from his friend and as it were his master [Bolingbroke], especially in foreign affairs, he became from a very disagreeable speaker and little knowing in business to be one of the most pleasing and able speakers of his time, wore out all the prejudices of party, grew moderate towards the dissenters, against whom he once bore a most implacable hatred, studied and understood the nature of government and the constitution of his own country, and formed such a new set of principles with regard to the public, and from them grew to think that the religion and liberties of the nation so much depended on the support of the present family to the throne, that he lost all confidence with the Jacobites and the most rigid of the Tories, and it is thought would have left them entirely if he could have stood the reproach of that in his county or could have maintained a prevailing interest there without them; and upon that footing would willingly have come into a new Whig Administration upon the exclusion of Sir Robert Walpole, with whom he would never have acted, and with the admission of some few of his Tory friends who in company with him would willingly also have left their party for such a change.11

His association with Bolingbroke, whose name was anathema to the Whigs, was frequently used by Walpole to discredit him, notably in the Dunkirk debate in February 1730, which Walpole turned in his favour by hinting ‘that Bolingbroke was at bottom of this inquiry concerning Dunkirk, and had sent for the evidences produced by Sir William Wyndham’,12

Wyndham’s professed attachment to the House of Hanover did not prevent him from taking part in the Jacobite negotiations with the French government in 1731-3 to restore the Stuarts. Lord Cornbury (Henry Hyde), who conducted the negotiations, secured the Pretender’s approval for a future Administration containing both Bolingbroke and Wyndham, who then proceeded to put forward a proposal that the Pretender’s eldest son should be educated as a Protestant under the care of Ormonde either in France or in Switzerland, and that the Pretender himself should abdicate, pressing their views through Chavigny, the French ambassador at London. The proposal was indignantly rejected by the Pretender, who also resented a speech made by Wyndham in February 1733, saying

that whenever there appeared to be any just fears of the Pretender, he would then show by his actions, as he always had done, what his principles were. That he believed he stood in the opinion of mankind acquitted of any imputation of Jacobitism ... that that was not the first time such insinuations had in that House been thrown out against him, but he would have gentlemen know, it was treatment he would no longer bear with.13

In the shadow cabinet drawn up by the opposition leaders during the excise bill crisis in 1733, Wyndham figured as secretary of state.14 When the Prince of Wales went into opposition Wyndham became one of his chief advisers, taking with him ‘Lord Cornbury and some others whom he had drawn aside to embark in Prince Frederick’s party’.15 In February 1737 he spoke but did not vote in support of the motion for increasing the Prince’s allowance, but in 1738 a scheme for a coalition between the Prince and the Tories broke down on Frederick’s refusal to agree to Wyndham’s stipulation that ‘the Prince’s people should join in reducing the army’.16 In 1739 he headed the unsuccessful secession of the Opposition.

Wyndham was not admitted to the negotiations, initiated in 1739, for a Jacobite rising, supported by a French invasion, which led to the Forty-five. In April 1740, when Lord Barrymore was about to visit Paris to confer with the French government on this matter, a Jacobite agent reported to the Pretender that Wyndham was coming over to see Bolingbroke, and probably Cardinal Fleury. He continued:

I shall prevent [warn] the Cardinal as to Sir William Wyndham. Though Lord Bolingbroke’s behaviour has been all along such as you know, and though Sir William Wyndham has been for some years very unaccountable, yet they both seem to dread that any business of the King’s [i.e. the Pretender] should be thought of without them.

Fleury was duly warned and gave all the ‘assurances and satisfaction’ required ‘with reference both to Sir William Wyndham and Bolingbroke’.17

Wyndham died at Wells, 17 June 1740, survived by his master, Bolingbroke. Soon after his death his son, followed by his friends, Bathurst and Gower, went over to the Whigs.