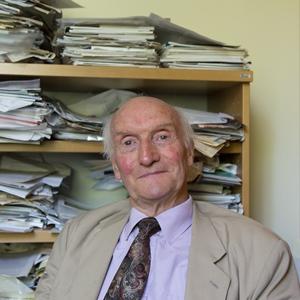 Donald Anderson was born in Swansea in June 1939 and attended both school and university in the city before becoming a barrister. In 1963 he married Dorothy Tortman, with whom he had three children.

Anderson joined the Labour party aged 17 and was first sat in the Commons for Monmouth between 1966 and 1970. On losing his seat he served as a London borough Councillor, before his election as MP for Swansea East in 1974. He was twice a PPS, once to Roy Hattersley, and became involved campaigns in favour of the European Economic Community. In the Labour party he became an opposition spokesman on Foreign Affairs (1983-92), Defence (1993-94) and Shadow Solicitor General in 1994-95.

Despite his position on the shadow cabinet he was not given a cabinet position by Tony Blair and instead became chair of the Foreign Affairs Select Committee. He was made a Privy Councillor in 2000 before retiring from the Commons in 2005. The same year he entered the House of Lords as Baron Anderson of Swansea.

Click here to listen to the full interview with Donald Anderson in the British Library.

I was not offered a job in 1997 by Tony Blair, although he virtually promised me [one]. There was a sort of ageism at this time. I remember saying to Bruce Grocott, “you and I don’t know”, and he’s a year younger than I am and was PPS to Blair, he said “oh no, effectively if you’re over, whatever it was, 55, there’s no chance.” I was fortunate then to move into the Chairmanship of the Foreign Affairs Committee. I guess if I had a government job I’d have been out in three or four years, but I was able to carry [the Chairmanship] on for two Parliaments, and I enjoyed the work on the committee.

Track 2 [00:00:10] Discussion about LA’s assistant. Describes staffing arrangements whilst MP. Describes taking temporary staff from outside organisations such as Educational Programs Abroad. Describes friendship with former interns. [00:02:47] Mentions staff placements from Christian organisations.  [00:04:04] Describes transition to life in the House of Lords and commitments as Deputy-Lieutenant of Swansea. Mentions relationship with current MP for Swansea. [00:05:24] Mentions having many friends in the Lords before elevation. Explains was not offered a job in 1997 promised by Tony Blair. Tells story of discussing ageism in cabinet appointments with Bruce Grocott. [00:06:34] Mentions appointment as chairman of Foreign Affairs Select Committee. Lengthy description of differences in atmosphere between the Lords and the Commons. [00:09:10] Describes commitments to think tanks. Mentions event following re-election of Vladimir Putin. Mentions attendance at European Council on Foreign Relations. Consults diary and reads over engagements. [00:12:02] Describes interventions of Baroness Finlay of Llandaff in debates on the NHS. [00:12:26] Mentions membership of the board of Mercy Ships with Lord McColl. Describes pattern of working week. [00:13:35] Describes social engagements in Swansea and relationship with local councillors. [00:14:38] Discussion of decision to stand again for Parliament in 1972. Recalls considering selection for Aberdare seat. Tells story about missing out on selection for Edmonton to Ted Graham. [00:15:47] Recounts luck in career at the Bar and as MP for Swansea. Discussion of highlights of parliamentary career. Mentions victories for individual constituents and on the Foreign Affairs Select Committee. [00:16:40] Tells story of being over-ruled in favour of an inquiry into the Iraq war. [00:17:34] Tells story of filming programme for BBC Wales on referendum into increased powers for the Welsh Assembly. [00:18:56] Mentions that differences are often not made to policy but on the margin. Describes view of the importance of the select committees and links with outside experts and academics. [00:20:45] Describes role of select committees as part of the pressure on changing policy. [00:21:18] Describes increasing importance of television to campaigns. Mentions that pressures, salary and press attention deterred sons from standing for Parliament. [00:23:40] Discussion of salary differences between a barrister and an MP. Describes view of money.