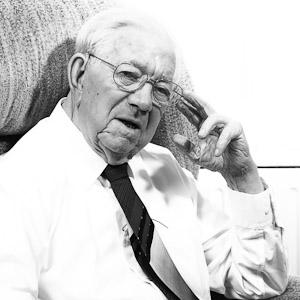 Jack Ashley was born in Widnes on 6 December 1922. He married Pauline Crispin in 1951. He was educated at St Patrick’s Elementary School, Ruskin College, Oxford and Gonville and Caius College, Cambridge.

Serving as a young Councillor in Widnes, by 22 he was a member of the National Executive of the Chemical Workers’ Union. After graduating from Cambridge he worked for the BBC. He unsuccessfully contested Finchley in 1951, but was elected for the Labour party to represent Stoke-on-Trent in 1966. Early in his parliamentary career he lost his hearing and considered resignation, but with his party and his wife’s support he learned to lip-read and remained in politics. He kept his seat until 1992, when he was made a life peer as Baron Ashley of Stoke.

Lord Ashley agreed to an interview for the project, and sat for his portrait. Sadly, he died in 2012, before we were able to carry out the interview.

The last thing I wanted was to be all things to all men because I was coping with a disability – I expected, indeed preferred, to attack and be attacked, although I required consideration for my need to lip-read. Edward Heath got the balance exactly right. When I criticized him, he answered just as strongly, but looked straight at me and spoke clearly. His attitude was increasingly typical of many Members in the House. At first, they must have been discomfited at my presence, but my disability was steadily and quietly accepted. While I was grappling with coming to terms with deafness, the House of Commons unostentatiously came to terms with me."

Sadly, Jack Ashley passed away before we were able to interview him. The above extract is from his memoirs.