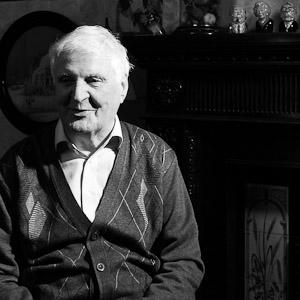 Joseph William Aston was born in Sheffield on 9 October 1933. He married Margaret Patricia Lee in 1957. He was educated at High Storrs Grammar School and Rotherham Technical College.

He began work as an engineer when he was a teenager and in 1962 he was elected to Sheffield Council, later becoming chief whip. He left to enter Parliament, winning the Bassetlaw by-election in 1968 for the Labour party by a small margin. He held the seat until he retired in 2001.

Click here to listen to the full interview with Joe Ashton in the British Library.

"[The Bassetlaw by-election in October 1968] It was a disastrous time. The Labour party was dying on their feet. They’d lost Sheffield, they’d lost safe seats with a 10,000 majority. I hadn’t got a chance. I hadn’t got a prayer. I knew that if I didn’t get it this time, forget it. They’d never seen anybody in those rural villages. Nobody had ever visited them. There was something like 40 villages, and two towns, Retford and Worksop. Lovely people, what you might call a bit insular and isolated, but none of what you get in the big cities, of back stabbing and dirty tricks. They were honest. And they took to me and Maggie. … They had never seen an MP in their life.  … We had everything against us: the weather was against us, they put the rents up, they shut another pit right in the middle. But you have to remember that when that happened, there was no telly. The television didn’t come on till 4 o’clock. So the miners had nothing to do if they were on night shift. They’d have a sleep, but if you got a loudspeaker and said This is your Labour party… I’d get the kids singing a song: vote, vote, vote for Joe Ashton, he’s the man… kids would give badges out. It was all a treat. Because it was a one-off thing, and the Government was in trouble, … it took off. And all the press – it was after the long recess – and all the papers came, and they encamped there. Barbara Castle came, Manny Shinwell, you name them, they all came up, and they went to a different village every time. … Nobody in Bassetlaw had ever seen anything like it before."

Track 1 [cont. from 2:27:14] [Returned to question about other foreign trips] Story about visit to Japan. [2:30:16] Mentions that he does not believe he had a political career. Reflection on being freelance. Story about a German television documentary on JA’s constituency and a ‘World in Action’ film on Scottish independence. Mentions using proceeds to fund local campaigns. Reflection on contemporary lobbying.[2:37:08] Reflection of changes in Parliament between 1968 and 2001. Mentions working practices and remuneration. Description of changes in Parliamentary culture. Mentions role of Trade Unions, remuneration and television. Story about speaking in favour of John Prescott during 2001 election campaign. Mentions changes in communication technology. Mentions continuing work as part of Association of Former Members of Parliament. [2:43:30] Reflection on role in altering age of consent and euthanasia. Mentions that JA’s mother suffered from a debilitating illness. [2:49:22] Reflection on changing role of constituency work after miners’ strike. Mentions extent of public support from constituents. Digression about ability to balance work and home life. [2:51:42] Comment about the rise of religious block votes and contemporary political situation in metropolitan areas. Mentions racial tensions. [2:53:55] Description of how an interest in sport helped JA as an MP. Mentions directorship of Sheffield Wednesday and select committee work. [2:55:37] Description of JA’s decision to retire. Mentions difficulties of travel and balancing commitments. Mentions decision not to pursue a seat in the House of Lords. Mentions retirement holidays and illnesses. Mentions continued link to Parliament via Association of Former Members. [3:00:54] Mentions not wanting to have house in London. Story about being burgled. Reflections on feeling lonely and links to Sheffield. Digression about free travel for MPs partners. [3:04:04] Reflection on atmosphere in the House. [3:05:34] Description of contemporary links with Bassetlaw. Mentions unhappiness at selection process in 2001 and belief that it was unduly influenced by Trade Unions. Mentions not wanting to stay on. [03:13:28] Reflection on parts of career that most stand out. Mentions ‘MPs for Hire’ story and freedom. Mentions influence of grandfather and experience of early life. Mentions anger at Harold Macmillan’s ‘Never had it so good’ speech. Mentions ability to chip away at problems. Mentions whipping system and JA’s play ‘A Majority of One’. [3:20:00] Description of atmosphere in Chamber and political humour. Mentions notable parliamentary performers.